The Boy Who Grew Dragons

Here is my latest book review for the Champaign-Urbana News-Gazette. 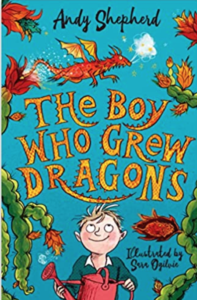 “The Boy Who Grew Dragons,” by Andy Shepherd, has all the elements of a classic middle grade story: plenty silly and full of adventure and magic. The main character has great relationships with his family, even his three-year-old sister who he calls Lollibob Bobalob (instead of Charlotte). He has a good group of friends and he gets along in school. His teachers appreciate his imagination … mostly.

The conflict arises solely from Tomas’s efforts to keep the existence of his pet dragon a secret. That’s right, a dragon. There are lots of dragons in children’s literature, of course. And those dragons have a wide range of characteristics, some are beloved and some are misunderstood, some like humans, some do not, but this is the first time I’ve read a book where the dragon is adorable, multi-colored, mischievous … and tiny. This particular dragon, which Tomas names Flicker, fits in his hand.

The story begins with Tomas helping his grandfather clear out his overgrown garden. In the midst of weeds and vines, they come upon an unusual looking plant. Taller than Tomas, it has “long green cactus arms” that hang down. “It looks like a giant upturned mophead … but you know — green and spiky and knobbly, too,” is how his Grandpa describes it.

I can totally imagine how Shepherd got the idea for this story, because her description of the dragon fruit tree and the dragon fruit itself is accurate. Of course, sadly, dragon fruits don’t, in fact, ripen into dragons, but don’t you wish they did?

Tomas reaches up gently to move one small fruit so it has more room to grow and it drops into his hand. This is where the story takes off, thanks to the author’s imagination. The fruit begins to glow, so Tomas takes it home. And who wouldn’t? Dragon fruits in real life are hot pink and have spiky scales, unlike any other fruit one might have at home, like bananas and oranges. Plus, did I mention, it was glowing?

At home the fruit continues to glow and also to pulse and grow a bit. At this point Tomas gets a little freaked out.

“To be honest, it wasn’t the behavior I’d come to expect from fruit,” he says. “I mean, bananas and mangoes never did this sort of thing. Even with kiwi fruit, you knew where you were. But this? Frankly, it was weird.”

The dragon hatches in the middle of the night and after his heart calms down, Tomas gets really excited. Best pet ever, am I right? Glittery wings, eyes like diamonds, scales that ripple through every shade of red, arrowhead tail, two little horns.

There are down sides however, to having a pet dragon. They include scorched walls, poop that smells like “rotten fish wrapped in stinky cheese with sprinklings of burned toast.”  Also, dried dragon poop is highly combustible, which leads to some real slapstick moments

From this point on, Tomas has to work hard to keep his dragon a secret. His friends — Ted, Kat and Kai — his grandfather and his nemesis, Liam, all notice him acting weird, and Liam takes to spying on him.

Plus, Grandpa has a new neighbor, a real grump named Jim (Tomas calls him Grim). Grim blames Tomas for all the destruction in his own perfect garden. Because he sees more dragon fruit skins on the ground, Tomas thinks there must be other dragons doing the damage.

Then Tomas spies some new flowers on the dragon fruit tree. He thinks that means even more dragons will be coming. Imagine the possibilities of multiple tiny dragons!

At this point, Tomas decides he has got to tell his friends, which in itself is a hilarious process.

I do not want to give up the ending but I will say that it made me think of the grand finale of a fireworks show, with some circus acts tossed in.

If you are looking for a good laugh and some marvelous magic in these very difficult times, I recommend reading this book. Happily, this is the first of a series, so you can spend even more time with Tomas and Flicker!

I know the libraries are closed but you could download the Kindle version, or even better, order it from your local indie bookstore. I recommend Hartfield Books in Monticello, which will ship books or do curbside pickup https://www.hartfieldbookco.com/

You also can go to indiebound.org to find an independent bookstore near you. Stay safe. Stay sane. And keep reading!

Addendum: Recently I also learned about bookshop.org, which donates a percentage of online sales to brick and mortar indie book stores, so check that out too!

← School Visits in the Time of Coronavirus Travel Inside a Book →