Magic vs Logic: A Field Guide to Getting Lost

What happens when two adults with children start dating? In “A Field Guide to Getting Lost,” by Joy McCullough, we can enjoy what happens when two such kids fit together like “chalk and cheese.” In other words, these kids, Sutton and Luis, are so different from one another it’s almost comical.

The story is told in the alternating voices of Sutton and Luis. Sutton lives with her dad, Martin, in an apartment building. Her parents are divorced, and her mom spends long periods of time studying the emperor penguin in Antarctica. Luis lives with his mom, Elizabeth, in a house in a quaint part of Seattle. His father (who was from Guatemala) died when he was two.

We learn that Sutton does not like change. She likes routine, facts and logic. “Sutton’s life wasn’t perfect as it was, but the variables were manageable. She knew what to expect.” She spends her time programming her mini-bot to navigate a maze.

Luis, who loves the magic of books and movies, spends his days writing stories about adventurous kids with superpowers while, between his allergies (pollen, bees, peanuts, gluten and dairy), his fear of dogs and his very protective mom, he can barely leave home.

The story begins with Sutton discovering that her mother won’t be home for her all-important 10th birthday and with Luis having an allergic reaction that lands him in the ER (again) and interrupts his mom’s date with Martin.

McCullough does a great job illustrating Sutton’s mixed feelings about her mom. While she appreciates the work her mom does on an intellectual level, emotionally she feels abandoned. She struggles with those conflicted feelings, especially as they are connected to her big birthday. This struggle is a great one for young readers that you rarely see in many middle grade stories. There is no easy answer, but it is a legitimate feeling that I imagine many kids have, even if their parents are living under the same roof but are continually distracted by work.

Luis feels frustrated that his mom has to worry about him so much. He wants her to be happy. “He was tired. Tired of messing things up. Tired of missing out. Tired of reading about adventures he would never have because so many things in the outside world could kill him. Or at least make him super itchy.”

To make up for interrupting his mom’s date, Luis suggests the four of them go to the Museum of Popular Culture. This first meeting is a disaster. When Luis asks Sutton about her robot, she tells him about its processor, operating system and input ports. When Luis asks, “does it have a name?” Sutton just gets confused. Their communication was on such different wavelengths, Luis thought it was “like when his abuelos used a Spanish phrase so local to their region that he couldn’t understand it or even figure out its meaning by looking it up.”

Luis is disappointed because he is thrilled his mom is dating, and he and Martin get along great with their shared interest in books and movies. Sutton, on the other hand, worries that her father is going to propose to Luis’s mother and that will only lead to more change, the thing she hates the most.

When the two kids get lost together in Seattle’s Discovery Park (on the second group date), they discover that while they might not have much in common, their strengths complement one another. Sutton’s logic and Luis’s imagination combined get them back to the parking lot where their parents are waiting for them. For example, Luis remembers reading about making a cairn, a pile of stones, so that they can mark their path and Sutton’s grasp of logic and physics gives her the idea to make the base wider and with larger stones. Sutton helps Luis calm down with deep breathing and even takes a bee sting for him. Luis helps Sutton cross a swinging bridge that she is scared of.

This possibility of the two families merging is raised in the story and we see each character pondering what that mean, but we don’t see what, if anything, happens. The way each kid thinks through the idea reveals a lot about their personalities. In addition, it gives the reader something to think about long after they have finished the book! 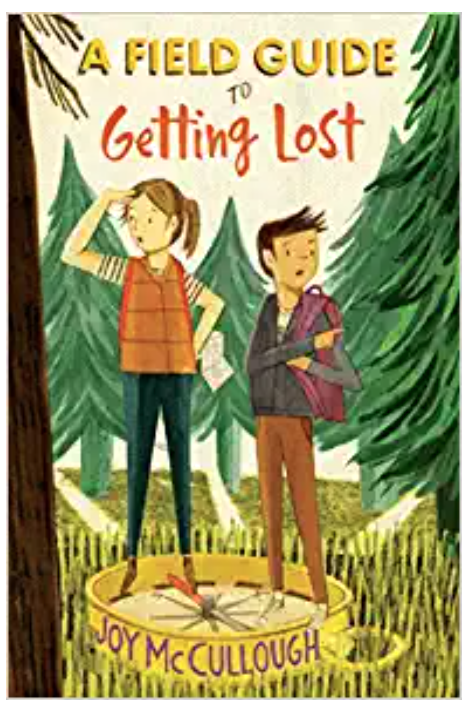 ← Travel Inside a Book Looking For Silver Linings and Finding Puppies and Webinars... →