A Tiger in the Basement: Tae Keller’s Amazing Book Wins the Newbery!!

“When You Trap a Tiger,” by Tae Keller, is for middle grade readers on the older end of the category. For those readers, I predict this story will whack many of them in the heart. It’s a story that made me cry and yearn and occasionally stop reading and say, “wait, what?!?” It is a coming of age story that will reverberate for a long time.

The main character, Lily, is what her big sister, Sam, calls a QAG (Quiet Asian Girl). The story is set in a summer of immense transition for Lily. She and Sam and their mom move in with Ae-Cha, Sam and Lily’s maternal grandmother. Sam is resentful. Lily doesn’t mind, both because she has a very close relationship with her grandmother, who she calls Halmoni (Grandmother in Korean) and because she doesn’t have any close friendships that she left behind.

In the very first scene, as they drive toward the house, Lily sees a tiger in the road, though neither her mom nor her sister sees it. The reader realizes from this moment that there will be some sequences in the story that are only loosely based in reality.

I love the author’s voice: “Halmoni’s house looks like a memory. The living room and kitchen cuddle together around a purple dining table and a fireplace that doesn’t work. An old grandfather clock tuts in the far corner of the living room.”

When they arrive at Halmoni’s house, the reader gets the sense that things are not all quite right. The normally vibrant Halmoni throws up, she sleeps a lot, she has dozens of pill bottles by her bed, she hallucinates and sometimes she forgets things. Things like, who Lily and Sam are.

Lily wants to help, which is how she begins to interact with the tiger, which is, maybe, mostly hypothetical, but also very, very real.

“What do you do with things that feel real but aren’t, really?” Lily asks.

Lily soon makes a friend in Ricky, a white boy her age whose great grandfather, he says, was a tiger hunter. He is so full of open-faced enthusiasm you can’t not like him. When Lily decides the way to help her grandmother is to capture the … hypothetical tiger, in her halmoni’s basement, Ricky is all in.

Later, when Lily needs to cook rice cakes for the tiger and her family is busy, she goes to Ricky’s house. When the rice cakes don’t come out like her halmoni’s, Lily is ready to toss them in the garbage. But Ricky says his mom never used a recipe when she cooked.  “It turned out different every time. … Even if things aren’t perfect, they can still be good.”

Ricky is a true friend.

The reader, just like Lily, learns in the course of this story that life isn’t so simple; it’s not always black and white, good v bad. In addition, there is a lot of magical realism, mostly having to do with that talking tiger. It feels so realistic I struggled to remember it wasn’t really happening. And readers will learn about some Korean traditions, as practiced by Lily’s halmoni; there is a lot of talk of keeping the spirits satisfied, there are statues of lions for wealth, frogs to protect happiness, and herbs to cast away bad energy.

Meanwhile, Lily sees her invisibility as a kind of super power. But in her quest to help her halmoni, Lily finds a little bit of tiger in her. In Korean folklore the tiger is tricky and treacherous, but sometimes in this story we hear the tiger’s side and you can see that the tiger isn’t all bad.

“The story has always been that Sam acts out and I’m invisible. But maybe Sam doesn’t get to claim all the anger in the world. Maybe I don’t want to be invisible,” says Lily.

Watching Lily learn that it is okay to be strong (and part tiger) is one of the big things that carries the reader along in this marvelous story. 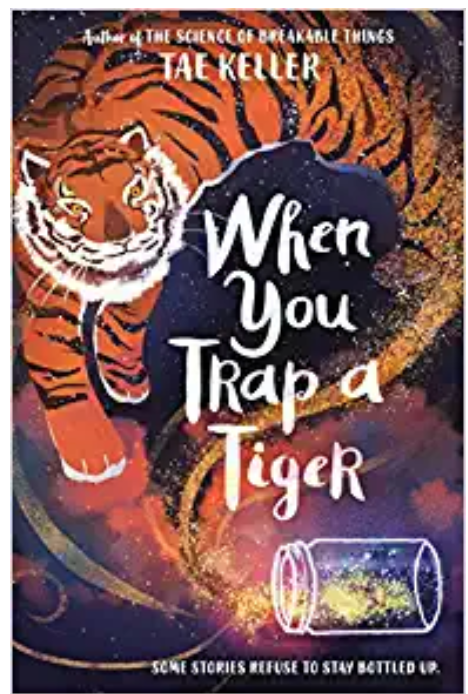